THE BRAIN BEHIND “SWEET”

“Music” they say “is food for the soul”. Music has been from time immemorial, the best weapon that penetrates through the heart of a man. God uses earthen vessels to carry His Presence and to reveal His glory. He speaks to the heart of men through ways the human mind cannot fathom, including music! Let’s know more about the song “Sweet”.

Interviewer: Can we know you sir?

I was born and brought up in Maiduguri. I am a husband of one wife and a father of two boys. I am a worker in the vineyard of God. Interviewer: You mentioned Birdling as part of your name and that name doesn’t sound Nigerian. What can you say about the name? Song writer: (smiles) Well, Birdling is a clan name from Adamawa State. The pronunciation is not as the English though, it’s the same spelling. Interviewer:. You mean to say you are not an indigene of Gombe State, and you are here in Gombe.

Interviewer: Can we know what brought you to Gombe? I mean, Why Gombe State?
Song writer: I.. I was born into a family of a Minister in Maiduguri. I mean that my father is a Minister so I served under him and God revealed severally to me that my destination is not Maiduguri. I had to obey God and follow His bidding. Then, He led me to Gombe and here I am. Interviewer: So for how long have you been in the music Ministry?
Song writer: I have been in the Ministry since 2005. Although, I have before then loved the music ministry, with much motivation from my parents who have been in the choir and especially my father who was a choir master. I have at that time written a song to present at my graduation ceremony but it was cancelled because of the numerous events that day.
Interviewer: Since 2005! That’s a long time ago, I must say. Now, it is then notable that you have released songs from that time on. How many singles do you have?
Song writer: Yes, I have had singles recorded. Some, only sung with the choir, because I was a music Director with my father’s ministry. Interviewer: SWEET is an amazing song. What is the inspiration behind it?
Song writer: I got this song on the fateful Saturday in February, when the presidential election was postponed.

That period was our “Honey and Communion Service” and I was meditating on the service, and I took that day to reflect on all the hurdles life has set for me and the people around me and the song just came that after all of these hurdles, life must be sweet. These hurdles’ from my settling down in matrimony without a concrete job, my calling as a Pastor in another ministry other than my father’s, my ordination into ministry, my leaving home for another state and all of that. Now, all of these phases didn’t come to me as cold water. Sometimes, the lines just don’t add up and all of that but, the word of God which has opened my eyes to see that man is not on earth to suffer but to enjoy life, made so much differences in my life and it kept me going. I look at the turning of water into wine. That water is a mess in that tradition and because Jesus was in there, the water became Sweet, sweeter than man could have imagined (John 2:1-10). It wasn’t easy for my father to let me be ordinated by another ministry. The song is a prophetic one, on the basis that no matter what life throws at us as humans, when we keep professing, when we keep speaking, life obeys us because of the power that resides in our tongues.

You know, when I look at my life and all that I have been through, I am glad that life is sweet and life will of course be sweet. (When you take bitter leaf and drink water, your mouth tastes sweeter than the bitter) Interviewer: Alright! Now that we know about the song Sweet, are we expecting an album or another single soon? Song writer: Well, I am working on something, by the end of the year. I have a target to meet up to, I mean an album, before or by the end of the year.
Interviewer: What have been your challenges with the music ministry? Song writer: There have been challenges in this part of the ministry. One of the challenges is the issue of the producer not giving you the exact thing you require of them. Still on the producers, they don’t go the mile of encouraging or advising the music minister on certain elements of his song.
Interviewer: What do you have to say to the producer, the music minister and the upcoming music minister?

Song writer: Life is governed by the Spiritual although the physical is seen beyond the former. I would tell you or the reader that life is first of all Spiritual so everything s/he does must be Spiritual. The Presence of God is Paramount in the life of anyone who wants to be used by God. It is not enough to have the voice and the techniques. Personal experiences and encounters births Spiritual songs that can build the nation for Christ. And to producers, I will say, do not be found in between. Choose a side and stick to it. And finally, to every believer, Know God for Yourself. Your life must be sweet.
Interviewer: How do the readers contact you?
Song writer: You can contact me via a phone call on 08065666824, or Email : Jafiya.birdling@gmail.com or Facebook page : Apostle Ijafiya Birdling, Thank you.

It’s amazing how people yield themselves to be used by God. It is also amazing that beyond the beats we hear from songs, there are stories behind them.
To you my reader, I am encouraged by this conversation and I have no doubt you are encouraged too. No matter the hurdles, no matter the heartaches, life will be sweet in Jesus name. Just keep your head up high. Stay positive 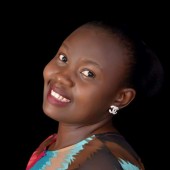 She is a lover of God,a teacher of the word and a servant in His vineyard. A Philanthropist, Writer and a Speaker.